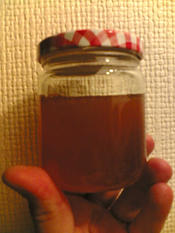 I've just been browsing through and found MYM's 24-hour apple terrine.  I didn't have any woodruff, or lemons, or 16 granny smith apples, or even a 10" loaf tin but I did have 6 or so coxes that needed using up -- that were already too soft for normal eating -- and a tiny half-pound loaf tin.

So I set to work.  Once peeled, you can run the apples up and down the cucumber slicer on the box grater much quicker than you slice them finely manually.  Making caramel is always exciting.  (Washing up afterwards, much less so...)

What with my computer upstairs and the kitchen downstairs, I always read through a recipe, commit the vital parts to memory, and then recreate in front of the cooker.  I almost never get a recipe exactly right first time.  Over the weekend, I was discussing this with a friend -- he thinks the first time, you should make it exactly as per the recipe, and then adapt it to your tastes later.  I just muck about with what's in front of me, omitting things I just don't plain like, adapting the quantities to suit how I like things.

This apple terrine probably has vastly too much ground cinnamon in, on coming back upstairs to check the recipe.

After completing the terrine part of things, double-wrapping it and putting it in the larder to chill until tomorrow, I saw the forlorn-looking square apple cores and peelings in a heap waiting to go in the compost, and thought it was rather a waste.

An Announcement in the newsgroup uk.media.radio.archers earlier this evening told me that the UMRA Cookbook had recently been updated, and so I had spent some time there.  There was a onion marinade recipe attributed to me that I have no recollection of at all, and when I was reading that, I noticed Vicky's Apple Jelly recipe calling for cores, peelings and windfalls, and thought I could make jelly out of my remains.

I boiled up the six cores and associated peelings with a cinnamon stick snapped into small pieces, and managed about a third of a pint of cloudy pink apple juice. Hunting around the kitchen for the sieve and the pack of muslin squares, neither turned up.  I vaguely recall that we threw the sieve away because it was in the sink when we were broken into last Christmas, and we couldn't be sure we'd got all the bits of glass out.  The muslin squares -- who knows?  I've not used them since we moved in December, so they may not yet be unpacked.

So, I strained the apple pulp through the colander, using the potato masher to get more out of the pulp.  Considering that, the resultant third of a pint of juice was fairly clear.  Added to 5oz of jam sugar, boiled until setting point satisfactory, it made just under a small-jarful.  Tastes wonderful, going by the cooled scrapings eaten from the pan with the wooden spoon.

I never set out to make jam tonight.

And it never ceases to amaze me how quickly the kitchen goes from more-or-less clean to cluttered with dirty pans on every conceivable surface.