I started cataloging recipes on my own site, and so many friends said they liked it that we decided to expand it to a whole site of its own, so that they could join in.  Now the site is growing and growing! 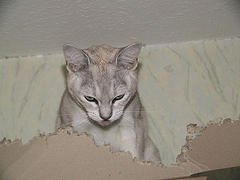 Finding a domain name for a new venture is always difficult - we spent hours and hours thinking what to name this, and everything we came up with, someone had taken the domain. Many were being sat on [snarl]

We live with eightsix cats, all of whom are wondrous. But only Liessa had a nibblous tail. And so Nibblous was born.

As you might also note, she's not above nibbling cardboard ... that was an entire box before she started. Yes, honestly.

And she spits out the bits. But she does alway say: