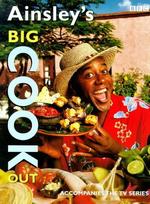 The irrepressible Ainsley Harriott returns with another slap-up collection of prime barbie treats. This time Ainsley has been doing a spot of globetrotting, picking up hot outdoor dishes from Canada, the USA, Mexico, Brazil and Argentina for our delectation (and for the accompanying television series). For starters, a slew of flavour enhancers to get things going--marinades, glazes, salsas and sauces, spiced up with Ainsley's unique style of nomenclature, such as "Ooh-la-la Red Wine Marinade" or "Wicked Kicking Salsa". Then we're off with a collection of recipes that burst with flavour. Appetisers? Try "Silvana's Sizzling Snappy Mussels". Main Courses? For chicken, what about "Alabama Chicken Brummie Balti"? (Birmingham, Alabama, that is.) Or for meat, "Chilli and Mustard Crusted Leg of Lamb"? Vegetables are often at their most flavoursome grilled, like "Spicy Lime-Charred Corn on the Cob". Even desserts get the full barbecue treatment, such as the sumptuous "Oaxaca Chocolata Omeletta", a chocolate omelette stuffed with crème fraîche and grilled. Naturally, all this hot work deserves a few drinks. Ainsley obliges with, among others, the "What's New Pussycat Strawberry Daiquiri" and the "Mississippi Wiggle Swizzle Punch". Fans who find they just can't get enough of Ainsley's smiling face will relish no fewer than 30 photographs of him, including one that justifies the price of the book alone, high up in the Amazonian rain forest with a sleeping monkey curled round his head. --Robin Davidson