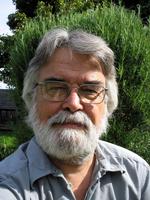 The kids have (mostly) flown the nest, so it's just me and Phil (until we move to the country and get a dog). I've been a teacher all my life - mostly working with infants. I'm currently working as a freelance IT adviser. I also work for Adoption UK as a trainer for adoptive parents.

Cooking - I love it. I lived in Italy for three years, so I tend to go for what's best in Italian cooking - and that's just top quality ingredients, prepared with a minimum of fuss. I've always found cooking therapeutic - especially kneading dough.

I've had several offers of marriage based on my chocolate brownies - I can't remember where I got the recipe.

When I'm not cooking I read a lot. I'm in the middle of writing my first novel. I've just taken up picture-framing (mostly to frame Phil's tapestries), and I play the tenor saxophone. We walk quite a lot - locally and in the south of France. I've stood for parliament twice (Liberal Democrat of course).

I don't have that many cookery books - probably about thirty. But the ones I have I use a lot - especially Nigel Slater, Rick Stein and Simon Hopkinson.

more about me at www.rayleighlibdems.org.uk