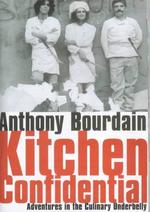 Kitchen Confidential is for diners who believe that their sublime sliver of seared foie gras, topped with an ethereal buckwheat blini and a drizzle of piquant huckleberry sauce, was created by a culinary artist of the highest order, a sensitive, highly refined executive chef. The truth is more brutal. More likely, writes Anthony Bourdain, that elegant three-star concoction is the collaborative effort of a team of "wacked-out moral degenerates, dope fiends, refugees, a thuggish assortment of drunks, sneak thieves, sluts and psychopaths," in all likelihood pierced or tattooed and incapable of uttering a sentence without an expletive or a foreign phrase. Such is the muscular view of the culinary trenches from one who's been groveling in them, with obvious sadomasochistic pleasure, for more than 20 years.

Bourdain, currently the executive chef of the celebrated Les Halles, wrote two culinary mysteries before his first (and infamous) New Yorker essay launched this frank confessional about the lusty and larcenous real lives of cooks and restaurateurs. He is obscenely eloquent, unapologetically opinionated, and a damn fine storyteller--a Jack Kerouac of the kitchen. Those without the stomach for this kind of joyride should note his opening caveat: "There will be horror stories. Heavy drinking, drugs, screwing in the dry-goods area, unappetizing industry-wide practices. Talking about why you probably shouldn't order fish on a Monday, why those who favour well-done get the scrapings from the bottom of the barrel, and why seafood frittata is not a wise brunch selection.... But I'm simply not going to deceive anybody about the life as I've seen it." --Sumi Hahn