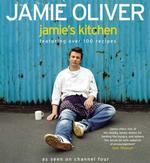 Jamie Oliver's new book, Jamie's Kitchen has only been home a few days and it's already a victim of sticky page syndrome. Like its predecessors--The Naked Chef, The Return of the Naked Chef and Happy Days with the Naked Chef--its beautiful photographs are slightly slick with olive oil and the clear layout of recipes is traced across with fingerprints of chilli jam, while crumbs of polenta and splinters of rosemary nestle in the gritty crease of the spine. And that is the best recommendation for any cook book.

Oliver's recipes are truly irresistible and this book might well be his best ever--both in quantity (100 recipes) and quality. The Channel Four series associated with the book will focus on his experience of setting up a restaurant school to turn unemployed kids into professional chefs. While Jamie's Kitchen isn't a course book per se, he takes home cooks through kitchen essentials including poaching, boiling, steaming, stewing, frying, roasting, grilling and baking--all in a no-nonsense style.

He proves to be a terrific pupil of his own culinary education, spun in true-to-form Jamie style by the results of his experiments. He has learnt his lessons well from his time at the River Café with recipes such as spring minestrone, pasta and risottos to dream about and a focus on the quality and seasonality of produce. Rick Stein's style of pedagogy also works very well here with sections on basic chef skills such as chopping, boning and filleting. Jamie also helpfully includes easy recipes to some of the basics of French and Mediterranean cookery such as pesto and aioli. But he's also extended his playful ways with oriental cuisine--tempting us with dim sum delights such as steamed pork buns. He also finds room to skirt the borders of increasingly popular Spanish and Middle Eastern flavours with sweet roasted garlic soup and Lebanese lemon chicken respectively, and makes sure to throw in some dinner party dynamite with headliners such as fresh mackerel cooked in pomegranate, lime juice and tequila, and a baked chocolate pudding that's almost too good to share..

Will you be able to get or give a better cookbook than Jamie's Kitchen? You could try, but we wouldn't bet on it. --Fiona Buckland