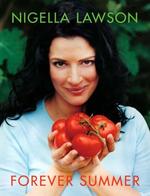 The cover of Forever Summer features Nigella Lawson posing in a convertible car with luggage piled behind her, as though driving along the Riviera. Her beaming smile, however, betrays a hint of strain. Can she be wondering whether success and fame constitute something of a treadmill? Given that she has attained iconic single-name status, will she ever be able to return, should she wish, to the humble obscurity of serious journalism?

If treadmill it is, it's one she continues to work with considerable panache. What she never lacks is poise: her effortless blend of the artless and the deeply considered does not fail, here, to beguile. Nigella's appeal is, of course, a lifestyle thing--you, too, could be at once an intelligent modern woman and an old-fashioned vamp, draped in pashminas and liable impulsively to pop off for a run down to Monte. In all this, and especially if you take her television persona into account, the food can seem a little incidental. But it is of course at the heart of the project. Nigella Lawson seems to have a knack of thinking creatively about food which allows her to turn a recipe over in her hands, as it were, give it a tweak and turn it into something livelier and fresher than it was before. So her Greek Salad marinates the red onion and omits the sapid cucumber, substituting sliced fennel. Barbecued Sea Bass is stuffed with preserved lemons (pickled, incidentally, in a usef! ully unusual way). Roast Potatoes are given in their Swedish Hasselback form (sliced nearly through, so they fan out in cooking). The section on ices is adorned with Margarita Ice Cream ("surely what angels would eat at their hen night"), while Nigella indulges her inner slapper with Slut-Red Raspberries in Chardonnay Jelly. Above all, she communicates, through dozens and dozens of recipes, the ideals of freshness, simplicity, spontaneity and immediacy, a combination it's hard to resist. --Robin Davidson