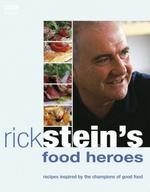 What a likeable cook and writer Rick Stein is, apparently quite without side or any need to posture. Tirelessly generous, Food Heroes salutes those people who work hard, in the face of market pressures and often widespread indifference, to make available the very best British produce. Cheese, eggs, poultry, meat and game, fruit and seafood--the list of foodstuffs over which many of us have relinquished any claim to demand quality is a long and depressing one. Top marks, then to Stein for travelling the country and bringing a bit of publicity to those who labour in the vineyard. He is remarkably good at making clear just why quality matters so much, not only in terms of flavour, but on humanitarian grounds too. (He pointedly muses on how very much more cruelty might be prevented if single-issue anti-hunt campaigners broadened their concerns to include intensive farming.)

Some of the names here are more familiar than others: many people have eaten Mrs Kirkham's remarkable Lancashire cheese (though some apparently think she is no more real then Mr Kipling), or enjoyed the products of Loch Fyne and the Duchy of Cornwall; they are merely the most prominent among more than 300 producers and suppliers listed in the extraordinarily thorough and useful directory. One wishes them all well and hopes that this book (and the TV series) will have an appreciable effect on the nation's food buying. At least no-one can say that Rick Stein hasn't tried. The recipes he produces to demonstrate how to make the best of this fine produce are, as always, simple and impeccable, mingling a nice appreciation for tradition with a clear-sighted modern practicality. Roast Grouse with Bread Sauce and all the Trimmings rubs shoulders, as it were, with Medallions of Venison with Red Wine and Morello Cherries accompanied by Roasted Hazelnut Spätzle (a remarkable dish), while simple, old-fashioned puddings like Coeur à la Crème and Summer Pudding sit happily alongside chef's creations such as Fresh Raspberry Tart in Coconut and Hazelnut Pastry. The book is a feast and a pleasure, and if used as Rick Stein intends, may make the world a slightly better place. --Robin Davidson