the oxford companion to food 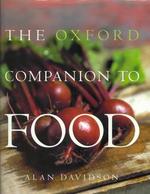 Alan Davidson's Oxford Companion to Food has been over 20 years in the assembling, but here it is; and it is superlatively worth the wait. In fact, superlatives fall silent. A huge and authoritative dictionary of 2,650 entries on just about every conceivable foodstuff, seasoning, cuisine, cooking method, historical survey, significant personage and explication of myth, it is supplemented by some 40 longer articles on key items. Davidson himself (no relation) contributes approximately 80% of the 2,650 entries, thereby guaranteeing high levels of erudition, readability and deadpan feline wit. Since this is a monument intended to last, nothing so frivolous as a recipe is included. A decision taken early in the development of the project to abjure issues whose significance is largely topical has also ensured an agreeable high-mindedness--nothing on those crucial but essentially dreary topics BSE and GM foods, for example.

If a fault could be found, it would only be that it's often difficult to read to the end of an entry, as the abundant cross-referencing all too easily sends one off to another entry, thence bouncing off to another, and all too soon the original is forgotten. A random alphabet of seductions might include: Aardvark, Botulism, Cup Cake, David (Elizabeth), Enzymes, Fat-Tailed Sheep, Gender/Sex and Food, Hallucinogenic Mushrooms, Ice Cream Sundae, Jewish Dietary Laws, Kangaroos, Lobscouse, Microwave Cooking, Norway, Offal, Puffin, Queen of Puddings, Roti, Scurvy, Termite Heap Mushroom (or Taillevant), Umeboshi, Vegetarianism, Washing up (a very elegant little article), sadly no X, Yin-yang and Zabaglione. As this might show, Alan Davidson's aim, borrowed from Dumas' great Grand Dictionnaire de Cuisine, that his work would appeal not only to persons of "serious character" but also those "of a much lighter disposition", is utterly fulfilled. --Robin Davidson