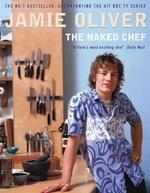 There are a few television chefs like Delia Smith and Nigel Slater who know exactly what viewers want. They cook food which is simple to prepare, but looks and tastes delicious. That's probably the reason why the BBC has bagged Jamie Oliver as the presenter of its series "The Naked Chef". A working chef at London's celebrated River Café, Oliver cooks simpler versions of what you would find on the restaurant's menu. It's basically modern Italian food using ingredients which can be found by almost anyone who is reasonably interested in food shopping. Like the television show, the book is titled The Naked Chef. In Oliver's words, this sums up the idea: "It's basically stripping back to the bare essentials." He applies this to all his recipes--from salads to roasts, desserts to pastas. He doesn't use culinary jargon nor time-consuming processes. In the book you'll find suggestions for ingredients to keep in your larder and herbs to grow on your windowsill. Recipes include Warm Salad of Radicchio, Gem and Pancetta and Beetroot Tagliatelle with Pesto, Mussels and White Wine. There are also tips on how to cook live lobsters, how to make gravy, preparing pulses for cooking, and how to make the perfect roast chicken. Several photographs accompany some of the recipes, with step-by-step instructions. Oliver's recipes for bread are particularly good--a tribute to his training at Carluccio's, the Covent Garden deli. This is the perfect book for anyone who doesn't want to spend much more than half an hour preparing meals and is not willing to compromise on innovation and taste. --Dale Kneen