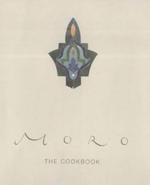 Moro joins the starry ranks of beautifully presented London restaurant cookbooks such as The River Café Cookbook and Momo that have excelled in delivering the tastes of the Mediterranean to our colder climes. Both the cookbook and the restaurant are the realisation of the dreams of Samuel and Samantha Clark, chef-owners and now writers. Their passion for the intense flavours of the cuisine of Spain, North Africa and the Eastern Mediterranean follow the saffron-cinnamon connection; the robust style of Spanish cooking balancing the lighter, more exotic dishes of the Muslim Mediterranean.

Tapas favourites such as tortilla, pimientos del piquillo (sweet peppers), boquerones (anchovies), sardines and chorizo share the table with familiar mezzes like grilled chicken wings with tahini, baba ghanoush and tabbouleh. But the joy of Moro is that it balances such favourites with rarer fare and new inventive recipes with traditional ingredients, such as the colourful and deliciously rich carcuteria cecina with beetroot and almond sauce and grilled quail with rose petals. If you thought you knew what to expect from paella, try monkfish paella with saffron or pork, chorizo and spinach, or Chicken, artichokes and oloroso sherry. All of which might not leave much room for the bitter chocolate, coffee and cardamon coffee cake or the Malaga raisin ice-cream.

If some of the ingredients leave you a trifle bewildered, Moro ends with an appendix of suppliers from specialty ethnic shops to local supermarket fare and a terrifically handy almanac of vegetables and fruits in season. Like its other restaurant cook books, Moro also serves up a feast for your eyes and belongs on your coffee table as well as in the kitchen, splendidly extending and deepening our appreciation for these too often over-looked cuisines. --Fiona Buckland